Forum / General Discussion / you not l33t until...

The cloak is constructed from advanced "metamaterials"
A US-British team of scientists has successfully tested a cloak of invisibility in the laboratory.

It works by deflecting the microwaves around the object and restoring them on the other side, as if they had passed through empty space.

But making an object vanish before a person's eyes is still the stuff of science fiction - for now.

We've opened the door into the secret garden

Prof John Pendry, Imperial College London
The cloak consists of 10 fibreglass rings covered with copper elements and is made of a "metamaterial" - an artificial composite that can be engineered to produce a desired change in the direction of electromagnetic waves.

This is done by tinkering with the physical structure of the material, not by altering its chemistry. In this case, the precise variations in the shape of copper elements patterned on to the ring surfaces determines their properties.

Like light waves, microwaves bounce off objects, making them visible and creating a shadow. But at microwave frequencies the detection has to be made by instruments rather than the naked eye.

The metamaterial cloak channelled the microwaves around the object like water in a river flows around a smooth rock.

When water flows around a rock, the water recombines on the opposite side. Someone looking at the water downstream would never guess it had passed around an obstruction.

Scientists were able to watch waves bending around the cloak
"These metamaterials have opened a new chapter in electromagnetism. We've opened the door into the secret garden," co-author Professor John Pendry, from Imperial College London, told BBC News.

In the experiment, the scientists first measured microwaves travelling across a plane of view with no obstacles. Then they placed a copper cylinder in the same plane and measured the disturbance, or scattering, in the microwaves.

Next, the researchers placed the invisibility cloak over the copper cylinder. The cloak did not completely iron out the disturbance, but it greatly reduced the microwaves being blocked or deflected.

"This cloak guides electromagnetic waves around a central region so that any object at all can be placed in that region and will not disturb the electromagnetic fields," explained co-author Dr David Schurig from Duke University.

"There is reduced reflection from the object, and there is also reduced shadow."

The authors admit the cloaking they demonstrated was not perfect. But they are confident they can make it much better.

In principle, the same theoretical blueprint could be used to cloak objects from visible light. But this would require much more intricate and tiny metamaterial structures, which scientists have yet to devise.

"As an application it's not clear that you're going to get the invisibility that everyone thinks about - as in Harry Potter's cloak, or the Star Trek cloaking device," said co-author David Smith of Duke.

John Pendry commented: "There's a rule about the internal structure of the metamaterial: it has to be smaller than the wavelength of radiation. So for radar waves that's 3cm. You can easily engineer something a few millimetres across.

"You go up to optical radiation - light - and the wavelength is less than a micron. So your microstructure has to be a few tens of nanometres across. and we're only just learning how to do nanotechnology maybe in five or 10 years time you could do this, but not today."

John Pendry said a metamaterial cloak could be manufactured to wrap around an fighter plane or tank. But, he said: "You mustn't demand that the cloak be too thin. Despite the hype around Harry Potter, this isn't anything that flaps around in the breeze, it's more like a shed."

Cloaking differs from stealth technology, which does not make an aircraft invisible but reduces the cross-section available to radar, making it hard to track.

It could be used to hide objects from terahertz waves, a regime that is being exploited for numerous sensing technologies, or even from mobile phone frequencies and magnetic fields.

basically, theyve made sumthing that can be like an invisibility cloak, could be used on airplanes, tansk etc, awsome, u see right through it

Satros wrote:
basically, theyve made sumthing that can be like an invisibility cloak, could be used on airplanes, tansk etc, awsome, u see right through it

ahhh kk cool that was much better.
I could read half of that

Reading comprehension FTW! It doesn't say that you could see through it, it said that they could make it invisible to radar and radio waves and that sort of thing.

Now, for a real invisibility suit

TOKYO, Japan (AP) Is he the Invisible Man? 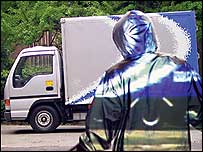 It looks like as if three men walking behind are seen through the body of graduate student Kazutoshi Obana during a demonstration of optical camouflage technology at Tokyo University on Wednesday.

The demonstration conducted by Professor of Engineering Susumu Tachi is an early stage of his research that he hopes will eventually render camouflaged objects virtually transparent by wearing an optical device.

The photo was taken through a viewfinder that combines moving images from behind and in front of Obana, who was wearing a luminous jacket to create the transparent effect.

The technology could prove useful for various professions.

Surgeons could use it to see through their own fingers and surgical tools during operations.

Another use could be in aviation where pilots could make cockpit floors transparent.

And WATCH THIS!: http://projects.star.t.u-tokyo.ac.jp/projees/oc-wired.mpg
I want one of those so bad right now.

is that that japanese guy from the show Heroes lol?

Bhaal wrote:
Reading comprehension FTW! It doesn't say that you could see through it, it said that they could make it invisible to radar and radio waves and that sort of thing.

It works by deflecting the microwaves around the object and restoring them on the other side, as if they had passed through empty space.

Ok that tokyo video is real no camera tricks i seen that at my asian buddy house lol i didnt believe at first cuase i was high as hell but yeah it could be as useful.

And that shit about information on military object being invisible on radar and all that other shit isnt gonna work for to long cuase this shit is all over the internet giving other countries back fire ideas and thats how america is gonna get defeated in a later world war 3 if we keep letting others out side of our countries get a peice of the information we post on the internet.

not i know the military maybe smarter then that just letting the minor information out but they have yet other big things kept secret from all of us U.S. citizens. u never know they might have 40,000 Metal Gear war machines already build or any giant like war craft that can cover a country the size of Australia. but we will continue pondering what they might have in mind untile a major attack far worse then pearl harbor and 9/11 to hit this country.

Oh yeah then we all wouldnt see home again cuase they are gonna jack us out of our house(men, young men) and hand us an army suit and a AK rifle with no training and there u go try to servive.

But me personaly ill play dead once i get shot in my vest, who ever passes me ill do a sneak shot they lay back dead hehe

this isnt being done by the military, a bunch of scientists that need to get laid felt like doing this

as for AKs, those are for poor countries, real countries use better guns

this isnt being done by the military, a bunch of scientists that need to get laid felt like doing this

as for AKs, those are for poor countries, real countries use better guns

Omg, invisibility cloak? Next you'll be telling me harry potter is real

YOUR A WIZZARD HARRY

i heard about that on the radio.. they also say they have -liquid telepathy- thats just awsome stuff