WaR has a new secret weapon.

Cliffs: As I was walking back from the gym, I stopped to grab my ringing iPhone from my gym bag. As I struggled with the zipper I notice something beside the path in the dirt digging. On closer inspection, I found it to be a massive 2 inch long bee, digging a hole. As I tried to open the Camera on my iPhone the damn thing crawled into it's hole and wouldn't come out. I even tried luring it out with my cock, but to no avail. I believe Satros had posted a video of bees being killed by these thingsbut they aren't just hornets.

Back in my dorm room, I went on Google and looked for things such as "digging bees" or "digging hornets" and matched pictures to what I had seen. This was no bee. 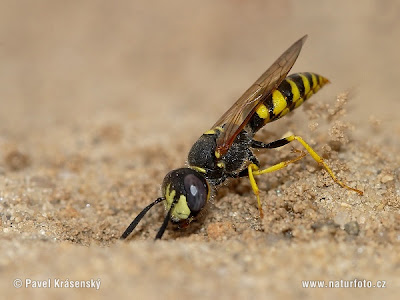 From Wikipedia: http://en.wikipedia.org/wiki/BeewolfBeewolves (genus Philanthus), also known as bee-hunters, burrowing wasps, or philanthuses, are solitary, predatory wasps, most of which prey on bees, hence their common name. The adult females dig tunnels in the ground for nesting, while the territorial males mark twigs and other objects with pheromones to claim the territory from competing males.
As with all other sphecoid wasps the larvae are carnivorous, forcing the inseminated females to hunt for other invertebrates (in this case bees), on which she lays her eggs, supplying the larvae with prey when they emerge. The adults collect nectar from flowers or from squeezing the bees they capture for prey; the nectar is their energy source for flight. The prevalent European species, P. triangulum, specializes in preying upon honey bees, thus making it a minor pest for beekeepers. Other Philanthus species may specialize on other bee species, or they may be generalists which prey upon a wide variety of bees, or other types of Hymenoptera.

European beewolf carrying a honey bee towards its tunnel.
They are notable in stinging their prey in a membranous location on the ventral surface where the venom quickly paralyzes major voluntary muscles, yet does not kill the prey. The prey may attempt to sting in return, but it is always grabbed in such a way that only well-armored portions of the beewolf's body are presented. The beewolf carries the prey back to a tunnel, but usually only stores it temporarily, until it is later used to provision a cell burrow, where an egg is laid.
The tunnel of Philanthus triangulum can be as much as 1 m long. The first part of the tunnel slopes downward at an angle of 30o after which it levels out. Up to 34 lateral tunnels each ending in a brood chamber branch off from the main tunnel. Each brood chamber is stocked with one to six honeybees.

Beewolves were once exclusive to the European areas, but have since spanned the ocean and migrated to North America in the past few years.

Harness their power. Genetically modify them with Kittie H4X to grow 10x their normal size. These will be the driving forces. Then engineer a Beewolf for each member of WaR to 200x size, and ride them into battle.

Against bees, zombies, ToR Clan, Kanye, or any other enemies of WaR.

O_O you should have done this daceades ago o.O

Good idea, lets get to it.

We don't have to worry about this though right? >.>

We don't have to worry about this though right? >.>

I don't think we humans have membranous locations externally. So unless they somehow manage to sting the inside of your nose/sinus cavity, or your rectum/anus you should be ok.

Wait. you don't have any external membrane locations?? Shit >.>
I suppose I should get that looked into? (:3)

These things burrow in my back yard. I'm pretty sure they ate one of my brothers.

Rose wrote:
These things burrow in my back yard. I'm pretty sure they ate one of my brothers.

Even better than beowulf huh? xD
WHAT THE HELL IS WRONG WITH BEES?!

Nossida wrote:
Even better than beowulf huh? xD
WHAT THE HELL IS WRONG WITH BEES?!

Nossida wrote:
Even better than beowulf huh? xD
WHAT THE HELL IS WRONG WITH BEES?!

but they make good honey  :rolleyes:

I think they don't go together.
WaR just hates bees.